The festival in Satun was the last festival of the 3 festival tour.
Arriving at the friday afternoon at the kitefield, Volker launched Elmo. The wind was good, so Elmo flew during the opening ceremony dinner. At the end of the dinner, Volker packed the kites and went back to the dinner tent. As all other kitefliers have dissapeared, he was invited to the Toyota Sponsor table for a chat and some drinks with the sponsors. Some time later, it became obvious that the the opening ceremony shifted to the main stage, were speeches were given.
During the next 2 days, mainly good wind made the kitefestival a success and attracted a big crowd in the late afternoon. During the day, it seemed a bit too hot for the locals to come to the event.
On the monday after the festival, a recreational day including a trip to the Diamond caves and kayaking was organised for the kitefliers.
Thanks a lot to Baew and Ron Spalding for the organisation of this great event!!!
Best regards
Volker 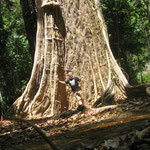 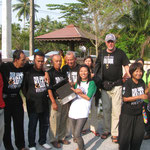 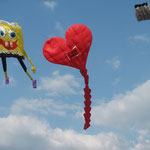 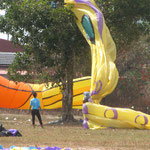 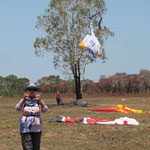